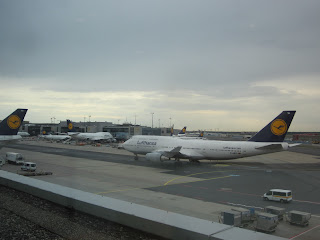 We were able to use the United First Class lounge (http://patstravelreviews.com/united-airlines-global-first-lounge-review-ord/) in Terminal 1 Concourse C for Our ORD to FRA flight. But the Lufthansa Agent is in the United Club in Concourse B near gate  B17. So we left a little earlier than we would have liked to ask a question about our seat assignments on the FRA to CDG segment.  The Lufthansa agent was very friendly and helpful.

Boarding was easy (there is a separate line for 1st and Business Class). The 1st Class cabin on LH is upstairs (although I received info on their 747-800 and looks like they have Business Class upstairs). Upon reaching the stairs the flight attendant rushed down to grab my wife’s bag to bring upstairs (which was nice because otherwise I would have had to make 2 trips 🙂 ) This 747-400 had the older seat so there were actually 16 seats (but they only book eight – so seat next to you is used for a bed) So my wife and I chose to sit together (which made her happy) We were offered a pre-flight drink. I asked for an orange juice (unfortunately it was  carton OJ – which was not that good) and it came with a small plate of nuts (macadamia). The only thing that was missing was the rose Lufthansa usually places in each seat in First Class. 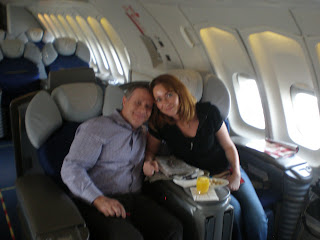 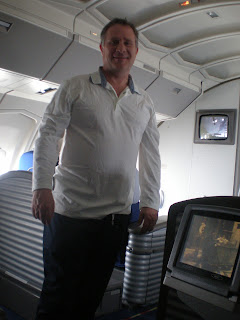 Because this aircraft had the older seats (the new configuration only has 8 seats) They had older and smaller TV. Was still AVOD (Audio-Video on Demand) and had a decent movie selection, but not great. Maybe 30 movies. I think newer seats have much greater selection (and United’s new entertainment has way more selection – will review that later as well) and much bigger screen. There was a choice of a few new releases and International movies as well as some older films. They also had TV programs and documentaries. The screen was touch control and you had to be firm with it at times to get video to stop or rewind.

The meal service started with Hors d’oeuvres. There was 4 choices (and you could take all 4 if you wanted). My wife was very excited to see black caviar (being from Russia). She had me take one which I gave to her. There was an extensive wine list. (unfortunately I do not drink wine so I can not give any details) But my wife had a 2010 Riesling which She enjoyed. 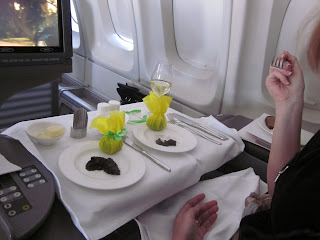 After the Hors d’oeuvres a salad was served 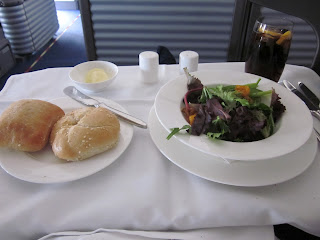 Followed by the main course. There was 4 options. Seared Tenderloin of Beef (which I ordered), Miso Bass with Udon noodles, Thai green Vegetable and Pumpkin Curry, and Braised Lamb Shank with penne (which my wife took  – which I also ate 🙂 ) Steak was very good, bread was  great, and lamb was ok (but I am not a big fan of lamb) 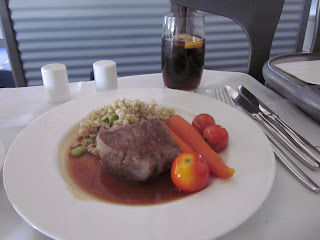 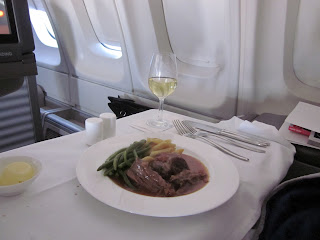 After dinner the dessert cart came and there was a large selection of cheese, a chocolate hazelnut cake, or a Berry Shortcake. The hazelnut cake looked good, but I wanted the Berry cake because it came with ice cream. The flight attendant suggested I take both, Which I happily did 🙂 The hazelnut cake was very good, as was the berry cake. My wife enjoyed her cheese. As you could imagine I was very full. Most airlines serve a chocolate after dessert in 1st or Business, but this flight did not offer this which I was ok with. 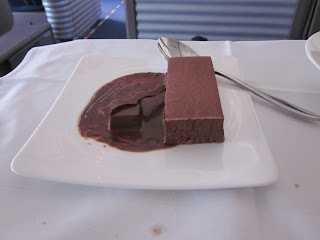 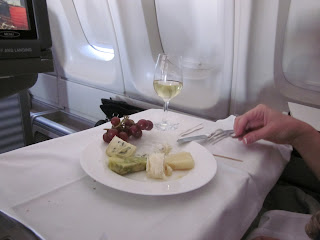 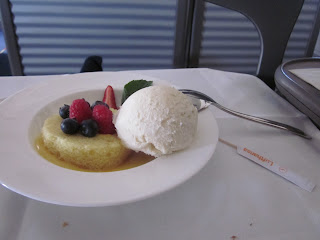 After dinner and dessert I finished watching a movie and was ready for bed. My wife was already asleep and had her bed made so I asked the flight attendant and he made my bed. He put a down comforter on top of the seat so makes for a more comfortable sleep. The seat does recline flat, but I prefer to sleep on planes more like a lounge chair. With back slightly raised. I was happy this seat could be adjusted in that mode as well. The CD collection was very good (had about 225 cd’s to choose from) and I listened to a new best of CD from my favorite artist (David Sylvian) that I knew would put me to sleep (and turned on map to see where we were). I thought the flight attendant told me breakfast was in 1 hour. So I thought not much sleeping time. The flight time was 8 hours and we were over Greenland so I should have realized we still had over 3 hours before we arrived in FRA. The CD worked and I was asleep in no time. Unfortunately, after the CD was over it turned to regular audio which woke me up. Luckily the CD was an hour and a half long so I slept a little more than an hour. Breakfast was still an hour from being served, but I started watching another movie. Breakfast was ok, but not great (maybe because I was still full)  – I had a small bowl of fruit followed by an omelet with red peppers (I also don’t like red peppers) and danish and bagel (breads were very good) and the orange juice was fresh squeezed :):) 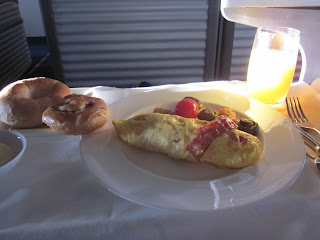 Before arrival I changed back into my clothes. Using the pj’s while may look funny, is certainly a more comfortable way to enjoy the flight.

We arrived a few minutes early. The flight attendant once again brought my wife’s bag down. Because we were upstairs many other people had deplaned before us (some Asian Carriers allow First Class customers to deplane 1st). I had heard that Lufthansa ground staff sometimes meets First Class Passengers, but not this time. I have been to FRA many times and I find it to be the most confusing airport in the world. Once we reached the terminal  we were not sure which direction to go for Our connecting flight. I knew we had to clear passport in Germany. But there were no signs for connections or passport. Nor were there any large flight departure screens to find out which gate our flight left from. I finally found a Customer Service agent and asked our gate and we proceeded the other way to clear passport. I found it interesting when I told this agent there is no signage helping passengers that she took some offense to this. This can not be the first time She heard this. In addition, to add confusion we arrived at a Z gate, and were leaving from an A gate. They recently changed the Non-Schengen gates from A to Z. So in reality we arrived very close to where our next flight left from. After getting our departure gate we passed thru passport quickly and the First Class lounge was immediately after passport. The Lufthansa First Class lounge is great (see review; http://patstravelreviews.com/?p=35)

So overall Lufthansa provides a very nice product. Better service than a US Carrier and their First Class is a big step up from their Business Class, I can only imagine their new First class (and Business Class) seats will make it that much nicer.