Not really much to review as it was only an hour flight. But the one thing to point out is the difference between Business Class travel in Europe and 1st Class in North America. Since I did not take any photo’s of this flight I am including 2 photo’s from FRA airport. The 1st is very exciting. A new ANA B787 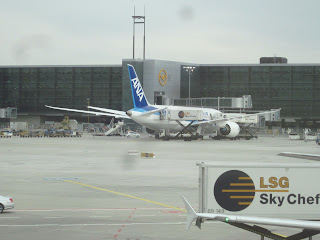 The 2nd is a Singapore A380. Passing outside the 1st Class Lounge 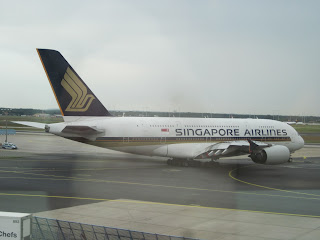 When flying Business Class within Europe you do have access to the Business Class Lounge (since we flew into FRA in 1st Class we were able to use the 1st Class lounge). Lufthansa has many Business Class Lounges in FRA (called Senator Lounges). They are much improved from what they used to be (very small and crowded with 2 slow computers and little food). Now they have free wireless access and have a great selection of food. Even having a special carving station for meat, baked potatoes or smoothie’s. Depending on lounge or time of day. In the US (I am not sure of Canada or Mexico) a 1st Class ticket does not gain access into the airlines lounges (except in 1st or  Bus. on UAL flights from JFK to LAX or SFO).

The gate was a short walk from the 1st Class Lounge (concourse A) and boarding did not start until 20 minutes before departure. Boarding (as usual in Europe) is a little hectic. They did allow for an elderly couple & a family with children to board 1st, but after that it was everyone else, which creates a bottleneck. There is no separate boarding by class or even row #. We were flying an  A321 which seats almost 200 people. So it was a little wait in line. That is one thing US Airlines do a good job of. They board in groups and have separate row for Elite Members and 1st or Bus. Class customers. So slightly more civilized for all (only slightly). We a pushed a few minutes late but made up for it with a quick taxi and take off.

The Business Class seating on LH within Europe is the standard economy seat (this is true with most Western European Carriers. Some Eastern European Airlines have the more spacious 2×2 seating).

The difference is they block the middle seat with a tray table. So there is space between you and the person sitting next to you (my wife was not happy about this, but this makes a big difference). It has only been a few years since they started blocking the middle seat (imagine paying for a business class seat and sitting in a cramped middle seat). The seats have the same pitch (space between seats) as economy does. So it is certainly not as comfortable as flying 1st Class within North America. However, unlike flying 1st within the US where the cabin is almost always full, Business Class within Europe usually only has a few passengers. So there is a more relaxed & exclusive feeling. Our flight was no different. Maybe only 8 passengers in Business (seating capacity on this plane was maybe 24).

For the quick flight (maybe 45 min) we were served a light cold breakfast snack (sorry, no picture). Consisting of cold apple pancakes (surprisingly tasty), small cup of fruit, small dish of cold meats & cheese and a nice roll. And to my pleasure fresh orange juice. This certainly beats the small bag of pretzels some airlines in the US would serve in 1st Class (I never understood an airline serving a salty snack in the morning – some do serve Biscoff cookies and to their credit United now serves a warm scone). I think they were even serving some small snack in economy as well.

By the time breakfast was over we were starting to our decent into Paris. We landed at CDG on time and a short taxi later we were at the gate into Terminal 1 (Star Alliance Carriers use this terminal). It had been a while since I was in Terminal 1 at CDG. I can remember as a kid seeing this airport in movies thinking how modern it was and even flying thru there in the early 80’s (I was still a kid!) thinking the same. But now it is showing it’s age. Still, it was nostalgic walking thru this terminal.

All in all, a nice flight on Lufthansa!!