This review is still of this hotel, but obviously is no longer relevant as it pertains to Hilton Honors benefits.

The Hilton Arc de Triomphe is located at 51-57, rue de Courcelles in the 17th Arrondissement  of Paris. It is a 10 minute walk from the Arc De Triomphe (and the Metro stop Charles de Gaulle) and a 5 minute walk from Metro Courcelles. This was my second stay at this hotel. The last was maybe 5 years ago and my memory of it was not all that great (partly because it is the only Hilton Hotel with a lounge that has ever denied me access to the Executive Lounge being a Diamond Member). So my expectations were not that great. We only stayed here because I was able to get 1 free night (we stayed two). The interesting thing is that I was able to get a standard award night for 40,000 points a few weeks before our stay. But when I first looked into staying here they wanted 135,000 points/night (A Conrad in the Maldives is 50,000 points a night). So I assumed the hotel would have a little bit of an attitude.

After waiting for over 30 minutes to be picked up at CDG (from Interservice Prestige) we arrived at the hotel a little before 1pm. We were greeted by a bellman who opened our door but we declined any help with our luggage. One of the reasons I was not more upset about Interservice Prestige’s tardiness was I was afraid our room may not be ready. Upon seeing a large crowd sitting in the lobby I knew my fear was warranted. Despite the crowd there was no wait for check-in (we checked-in downstairs but later found out we could have checked-in in the Executive Lounge) and was told that the room would not be ready for 30 to 60 minutes. So we stored our luggage downstairs and were given a key to access the 7th floor and the Executive Lounge. We were greeted at the reception area of the lounge with some indifference and told again our room would not be ready for more than an hour but we were being upgraded to a suite. While I appreciate the upgrade, after 20 hours of traveling I was more interested in any room. But I didn’t argue. My wife wasn’t too upset at waiting and the lounge had a lot of nice things to eat. After 20 minutes in the lounge and an hour walk in the neighborhood our room was still not quite ready. After an additional 15 minutes of waiting in the entrance to the Executive Lounge (I think they saw I was getting impatient) the room was finally ready (well past the 2pm check-in time).

Our room was on the 5th floor and was at the farthest point from the elevator’s. Unfortunately I did not take any photo’s of the interior of the room, but our suite had two separate rooms and two separate bath rooms. The bedroom had a large flatscreen TV and a good size bathroom with a shower and bath tub. The entry room had a desk, couch, large flatscreen TV, and a smaller bathroom that also had a shower.

When we entered our room there was someone from maintenance fixing a lamp (I think this was reason for additional delay). But what bothered me was how hot the room was (it was a nice warm sunny day in Paris). I turned the air-conditioning up and after a nice bath we headed out for the day. Upon returning to the hotel that evening the living room was even hotter, but the bedroom had cooled. I realized there were two units and the entrance room air was producing heat so I just turned off the unit and opened the window. I mentioned the air-conditioner being broke to the girl in the Executive Lounge but it was not repaired during our 2 night stay. Honestly it was not a problem as the bedroom was cool enough for a pleasant sleep. In addition to the air-conditioning problem, the sink in the main bathroom could not drain (the drain would not pop open) and water collected our entire stay. I never reported this, but with housekeeping service one day and turn-down service twice for them not to report seeing a sink full of water was disappointing. After the the first night we just used the other bathroom to wash and brush our teeth. Outside of those two issues the room was nice. Bed comfortable with good linens. Tub was large enough to take a comfortable bath. It was nice to have two TV’s as I was able to watch TV the 2nd night without disturbing my wife and the 2nd bathroom came in handy as well. We also had a view of the Eiffel Tower which was especially scenic at night. 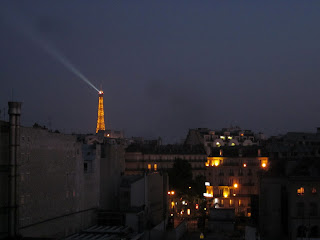 But what made this this hotel most enjoyable was the Executive Lounge. It was great (in fact, next to the Prague Hilton I would say it is the best Hilton Executive Lounge in Europe). The room was very large with many seats and tables and even had outside seating on the balcony. There were no computer’s but wifi was available. The one difference with this lounge is I do not remember seeing a TV nor was there much reading material. They served a very nice breakfast until 10am. Had fresh juices, croissants & breads, meats, cheeses, cereal, yogurt, scrambled eggs and bacon (that was fresh both mornings). After breakfast there were nuts, breads & cheese, croissants, and cookies along with beer, wine, soft drinks, water, coffee. This was available all day and in the evening they added a hot savory (we were never there during this time). The only thing that wasn’t served (or I did not see) was a dessert (besides the cookies and some chocolates late in the evening). 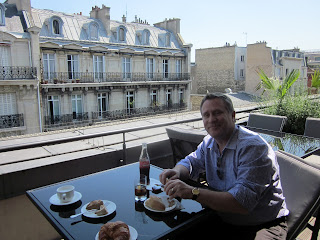 Overall the Hilton Arc De Triomphe is a very nice hotel. It has a 1930’s feel (not that I was around then). The Lobby was pleasant enough (despite the crowd when we 1st arrived) and there is a very nice atrium area that is used as a restaurant in the summer. It has a fitness room as well as a spa (no swimming pool to my knowledge). The rooms are relatively large and have nice bathrooms, but are still standard Hilton rooms. The hotel is in a good (not great) location. But if not for having Diamond status with Hilton I can not say I would have picked this hotel to stay nor would I stay here again. Having free Internet access (for gold & diamond members – otherwise there is a hefty fee for Internet access) and use of the Executive Lounge makes up for the few issues with the room, the late check-in and the slightly aloof attitude of the Front Desk staff in the Executive Lounge.